The lenders for the Port Victoria Rehabilitation and Extension Project (PVREP), along with the foreign consultants, are since Sunday in the country to conduct a week’s series of update meetings with the Ministry of Transport, the Seychelles Ports Authority (SPA) and other stakeholders involved in the project.

These meetings are in regards to delays in the start of the project caused by Covid-19, the financing aspect of the project, a new design of the quay and new layout of the terminal submitted and the procurement of a new terminal operator, following re-adjustment by a 10m seaward extension rather than the 40m extension from the original plan. The port is expected to be operational by end of 2024.

Following a meeting on the technical aspect of the project on Sunday held at the SPA conference room New Port, representatives from the Ministry of Transport led by the principal secretary for Civil Aviation, Ports and Marine, Alan Renaud, and representatives from SPA led by its chief executive Ronny Brutus, among other stakeholders, continued with their discussion at the same premises yesterday on the project and its financing with the representatives of Agence Française de Development (AFD), the European Investment Bank (EIB) and European Union (EU).

With the vision to turn the port into a modern and flexible Mahé quay that delivers to the country’s trading and economic objectives, to expand, lengthen, deepen and to modernise it, SPA had secured a loan of €16.5 from AFD, €12.5 million from EIB and a grant of €5 million from the EU.

Speaking to the press, SPA’s project manager, Philippa Samson, said that by the end of the week SPA will receive proposals and will reach to an agreement from the lenders and consultants in regards to the new concept design to start the rehabilitation and extension of Port Victoria.

Raoul Pedrazzani, deputy advisor EIM, said that given the external situations where material cost, including transport prices, are rising, it will be a major point of discussion during the next few days to find ways to best fine tune the cost of the project.

He added that although it might be difficult, the bank will be willing to discuss in the event that the cost for the project is higher than the estimated original cost.

For his part, André Pouillès-Duplaix, AFD regional director for Seychelles and Mauritius, said that although with the delays for the start of the project caused by the pandemic, all the stakeholders are on good terms to make the port operational by the end of 2024.

He added that a small point for discussion also will be the fate of the old light house, a historical monument. Together with the National Heritage, a solution has to be found to either preserve it or to have it destroyed to make way for an access to the new modernised quay.

Miko Van Gool, EU delegate to Seychelles and Mauritius, said that the reason for the discussion and for the involvement in the project of the different highly specialist experts from around the world, is because the project is financially and technically complicated.

He noted that the port project is for instance showing the importance of partnership between EU and Seychelles, among the various fields (good governance, maritime sphere and port security among others) that the two have worked and collaborated on.

The project to create a quay with a total length of 600 metres, including a seaward extension offset of 10m, for significant berthing space, among other adequate storing space and modernised facilities, will be done in three phases. Phase 1 will comprise the construction in the south of a quay wall of 300m and with dredging depth of 13.5m while phase 2 will be implemented immediately upon completion of phase 1 with the construction of another 300m of quay wall.

Phase 3, which will be a public private partnership project, is in conception phase and will consist of an additional extension by 400m southward from phase 1 towards the Queenie Bay at the ex Seychelles Coast Guard which will also include dredging the basin and approach channel to 16.5m in depth. 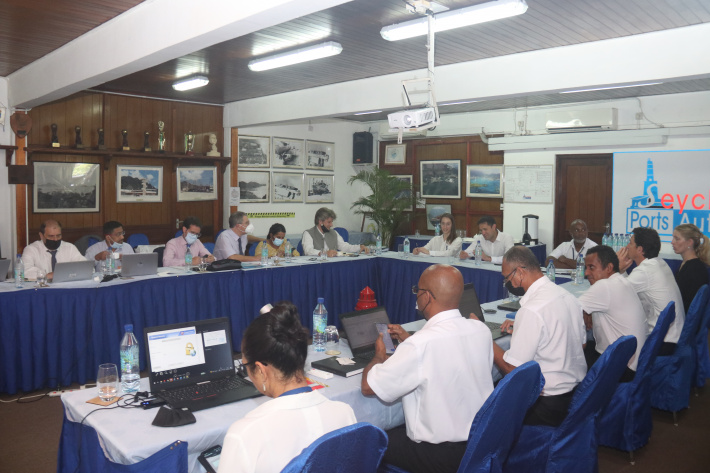 The Minister for Transport has overall responsibility for the departments, as well as its arm’s length bodies (ALBs), which have established governance structures.